What Does .com Mean?

.com was introduced as one of the first top-level domains (TLDs) when the Domain Name System (DNS) was first implemented for use on the internet in January 1985. Originally created to represent the “commercial” intent of a website, .com has since been at the epicenter of the digital revolution that has reshaped the way people work, live, play and connect with family and friends. 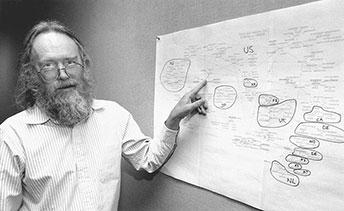 The first .com was claimed on March 15, 1985, by a computer manufacturer called Symbolics, Inc. Prior to this, the internet was largely a project driven by universities and computer scientists who used the network for research and communication. As more people and institutions began to use the network, electronic communications became increasingly challenging. Figuring out how to manually route messages through gateways was something of an art form and as mail loads became heavier, sometimes people would be asked to stop using their connections.

The need for some sort of organizing principles became more and more apparent as more entities connected into the fledgling internet. Bringing order to the increasingly chaotic universe fell to the legendary Jon Postel and his colleagues at the University of Southern California's Information Sciences Institute.

Postel became the request for comment (RFC) editor in 1969. As RFC editor, Postel and his colleagues personally shaped the internet as we know it today. In October 1984, RFC 920 "on the requirements of establishing a new domain in the ARPA-internet and the DARPA research community" was published, setting the stage for the birth of .com.

While we know that the first .com was assigned to symbolics.com on March 15, 1985, the genesis of .com is less clear. According to Craig Partridge, Professor & Department Chair of Computer Science at Colorado State University, the name for domains evolved as the system was created. At first, .cor was proposed as the domain for corporations, but when the final version came out it was switched to .com.

Jack Haverty, an internet pioneer at MIT, said they weren't really thinking about business when they were developing the top-level domains. "I think .com originally was derived from "company" rather than "commercial." The .com's weren't thought of as "businesses" in the sense of places that consumers go to buy things," he wrote in an email. "They were companies doing government contract work. The internet was not chartered to interconnect businesses—it was a military command-and-control prototype network, being built by educational and governmental entities, and contractors." Still, they seemed to understand that some kind of commerce was coming.

"I don't recall anybody ever thinking we were creating an organizational structure to encompass hundreds of millions of entities covering the entire planet in support of all human activities. And it certainly wasn't supposed to last for 30+ years, even as an experiment. It just happened to turn out that way."
- Jack Haverty, Internet Pioneer

With a current average of approximately 231.8 billion DNS lookups performed daily—and peaks far in excess of this—it is vital that Verisign’s internet services be operational around the clock. To make this possible, we have designed a sophisticated service from the ground up to address multiple complex, high-volume, real-time demands. This includes diverse hardware, operating systems, middleware and custom applications, power provider and network provider diversity and a number of other protections.

Verisign ensures the security, stability and resiliency of key internet infrastructure and services, including the .com and .net domains and two of the internet’s root servers, as well as performs the root-zone maintainer functions for the core of the internet’s DNS. Our commitment is ensuring that an infrastructure powered by Verisign is always operating at the highest level to enable the innovation required to address the needs of the future, while also addressing the needs of today.